The problem with liquid liposomes, (both injectable and oral delivery), is that they degrade quite quickly and have a short half-life. They are also more likely to break down in the stomach although it is not to say that they are ineffective, but less stable.  Liquid liposomes tend to show low-solubility and sometimes leakage of the encapsulated molecules.

There have been some innovative methods invented to handle these problems and of these  so-called prolipsomes has been the most promising. Development of these dry  liposomes began in the 1980’s for use in the pharmaceutical world.

The stability of prolipsomes is far superior to regular liquid liposomes.  They are a dry, free-flowing granular material (powder), that immediately forms a liposomal dispersion on contact with water or a biological fluid within the body.  When the dry powders are hydrated with water or body fluids followed by gentle mixing, (as in the stomach), the contents rapidly disperse to give a liposomal suspension in the aqueous solution.  In fact, THE LIPOSOMES FORMED ON RECONSTIUTION ARE SIMILAR TO CONVENTIONAL LIPOSOMES AND MORE UNIFORM IN SIZE.

To summarize the dried liposomes (proliposomes), are more stable, thus have a longer half-life. Only break down at the point of absorption in the stomach thus ensuring that a lot more of the ingredients in the liposomes reach the cells. 1,2 Photo of a single LipoCellTech™ powdered liposome after contact with body fluids. The phospholipids are on the outside and the ingredients in the middle. Magnified 30,000 X with an electron microscope.

Many studies exist on the efficacy of the liposomal delivery system, both liquid and dry. At this time this is not in question.  Using liposomes for nutritional supplements is a more recent development and there are  quite some studies showing that it is an effective delivery system for vitamins and other supplements.

Study with powdered vitamin B12

A single-dose, crossover study was conducted in six human subjects of equivalent doses of two dosage forms of vitamin B12 – a standard liposomal liquid and a liposomal powder-filled capsule (using LipoCellTech® technology). Each subject was given 3 mg of LipoCellTech® in one dosage form, followed by a washout period of 14 days, then dosing with the other dosage form. 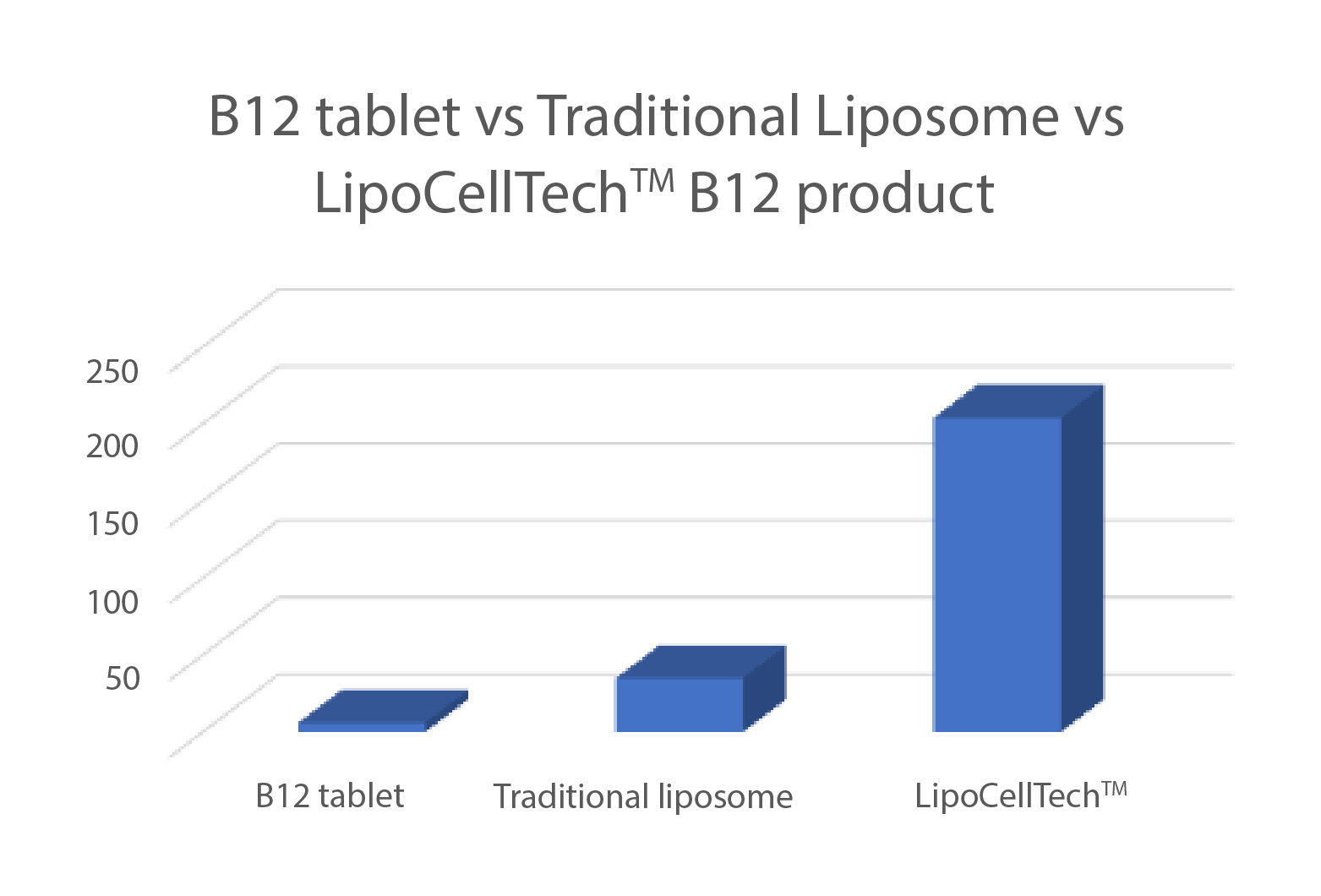 All subjects (with one exception) had an increase above baseline at one or more time points over 135 minutes. Serum B12 increased six-fold on average after taking the LipoCellTech® liposomal capsule, which was significantly more compared to the traditional liposomal liquid when comparing the highest peak of each subject’s serum B12.

The Effect of a Liposomal Cholecalciferol Preparation on 25(OH)*

Conclusion: Supplementation with a liposomal vitamin D product for 30 days resulted in a much

greater increase in serum 25(OH) Vitamin D than typical results after supplementation with a non-liposomal preparation (avg 73% vs 16%), proving the superior absorption of liposomal Vitamin D. 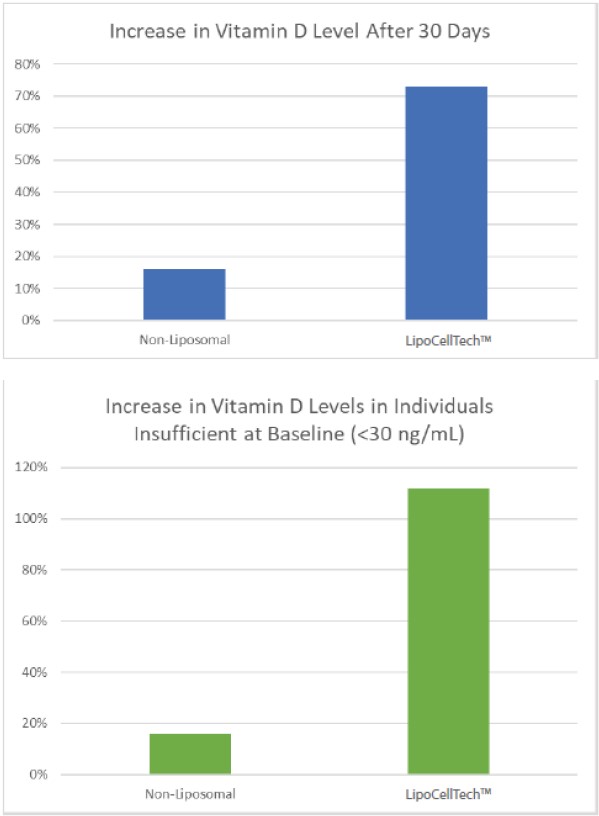 PART 1: How much Liposomal Vitamin C absorbs into a person’s blood (bioavailability)?

While high doses of regular vitamin C powder or capsules will be rejected at high rates from your body, Liposomal Vitamin C is a fantastic alternative. 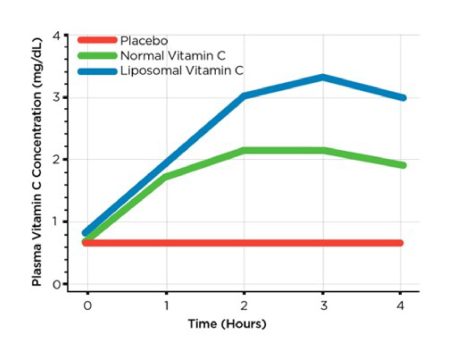 PART 2: What will Vitamin C do once in the blood (efficacy)?

The next step in the study is to determine if the Vitamin C concentration is meaningful.  In this regard, an ischemia reperfusion study was performed.  Ischemia describes any tissue that has been deprived of blood and oxygen. 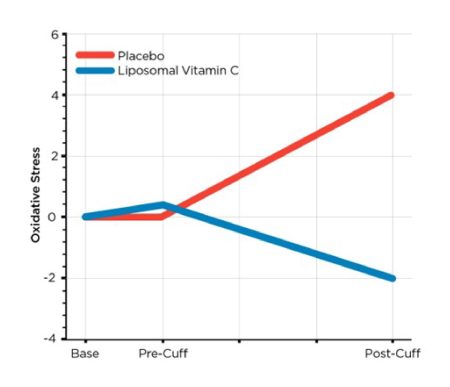 Background/objectives: Glutathione (GSH) is the most abundant endogenous antioxidant and a critical regulator of oxidative stress. Maintenance of optimal tissues for GSH levels may be an important strategy for the prevention of oxidative stress-related diseases. We investigated if oral administration of liposomal GSH is effective at enhancing GSH levels in vivo.

Subjects/methods: A 1-month pilot clinical study of oral liposomal GSH administration at two doses (500 and 1000 mg of GSH per day) was conducted in healthy adults. GSH levels in whole blood, erythrocytes, plasma and peripheral blood mononuclear cells (PBMCs)* were assessed in 12 subjects at the baseline and after 1, 2 and 4 weeks of GSH administration.4

* PBMC stands for peripheral blood mononuclear cells. PBMCs are a variety of specialized immune cells that work together to protect our bodies from harmful pathogens. Their location in peripheral blood is significant because they act as a line of defense from infection and disease.

Results: GSH levels were elevated after 1 week with maximum increases of 40% in whole blood, 25% in erythrocytes, 28% in plasma and 100% in PBMCs occurring after 2 weeks (P<0.05). GSH increases were accompanied by reductions in oxidative stress biomarkers, including decreases of 35% in plasma 8-isoprostane and 20% in oxidized:reduced GSH ratios (P<0.05). Enhancements in immune function markers were observed with liposomal GSH administration including Natural killer (NK) cell cytotoxicity, which was elevated by up to 400% by 2 weeks (P<0.05), and lymphocyte proliferation, which was elevated by up to 60% after 2 weeks (P<0.05). Overall, there were no differences observed between dose groups, but statistical power was limited due to the small sample size in this study.

Conclusions: Collectively, these preliminary findings support the effectiveness of daily liposomal GSH administration at elevating stores of GSH and impacting the immune function and levels of oxidative stress.